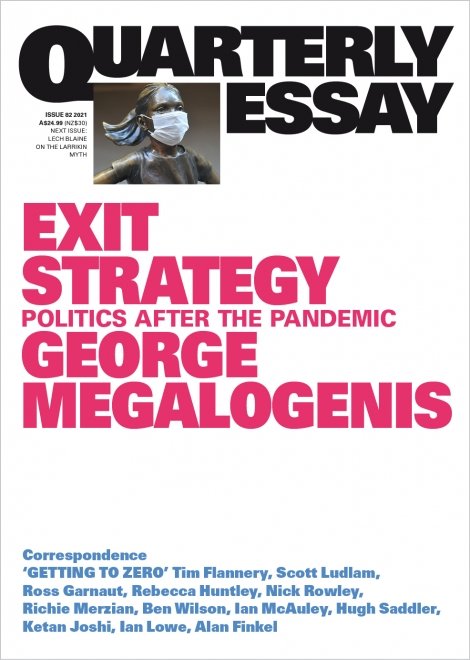 What should government be responsible for in the twenty-first century? Will Australia be a country of concern and care or will it be shaped by a politics of fear?

In Exit Strategy – Politics After the Pandemic (Quarterly Essay, 28 June 2021) George Megalogenis explains that between the fires and the plague, Scott Morrison had no choice but to adapt his style of leadership. But does he have an exit strategy for Australia from the pandemic?

This original essay explores the new politics of care and fear. Megalogenis shows how our economic officials learnt the lessons of past recessions and applied them to new circumstances. But where to from here? What of the shifting dynamics of the federation, and the appeal of closed borders? What is the fate of higher education – what happened to the clever country?

And he asks: does the Morrison government have the imagination for the job?

“Morrison has no political interest in talking about the future. But passivity does not reduce the threat of another outbreak. In any case, the future is making demands on Australia in other ways” he writes.

George Megalogenis has thirty years’ experience in the media, including over a decade in the federal parliamentary press gallery. His book The Australian Moment won the 2013 Prime Minister’s Literary Award for non-fiction and the 2012 Walkley Award for non-fiction, and formed the basis for the ABC documentary series Making Australia Great. His most recent book is Australia’s Second Chance and he is also author of Faultlines, The Longest Decade and a previous best-selling Quarterly Essay, Trivial Pursuit: Leadership and the End of the Reform Era.

George Megalogenis never disappoints. This essay will be insightful, prescient and challenge our thinking. A discussion not to be missed.

The Melbourne Forum explores contemporary themes through the non-fiction written word. Come with an open mind, hear differing perspectives and uncover what your fellow readers think.