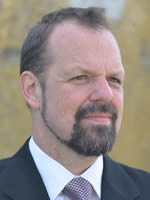 Humankind has always looked to the underground as a savior to its most pressing perils.

Professor Dix argues that solutions to many of the worlds most urgent problems today can be found in intelligent development underground. Drawing on examples as diverse as Hitlers secret city beneath the Eagle mountains to the nuclear shelters embedded within many European metros – dare to explore some options that lie beneath our feet.

Professor Dix will also discuss some key issues in subterranean mega structures such as cyber security risks, climate change challenges and opportunities and disasters underground (including the Burnley Tunnel Disaster in 2007 where Professor Dix acted as “special expert investigator” for the Coroner – which was recently covered in a documentary titled “Code 1: Minute by Minute, Death in the Tunnel, Streaming on 7Plus).

Some projects (which can be disclosed) using his scientific/engineering expertise include:

· His role as “special expert investigator” for the Coroner in the Burnley Tunnel Disaster (2007 -2012);

· Recipient of 2022 NAtional Fire Protection Association of the United States award for contribution to fire safety in road and rail tunnels;