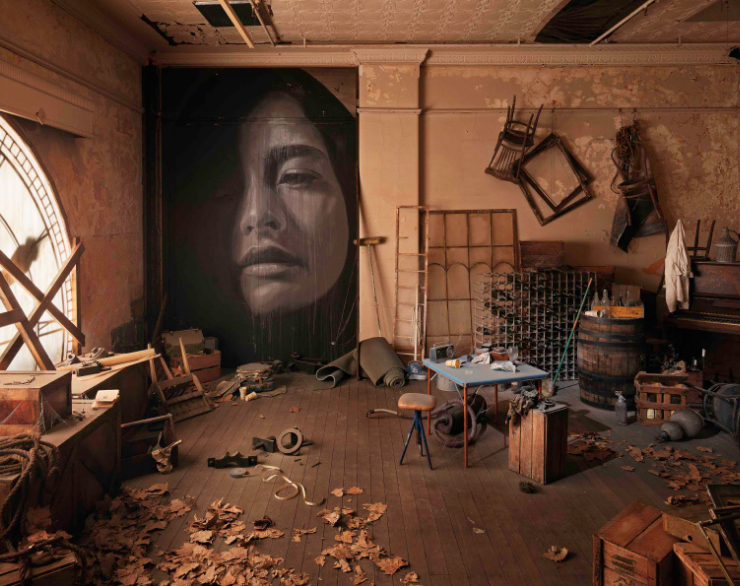 Beauty can be fleeting

Finding the friction point between beauty and decay is a thread that runs through much of Rone’s work. As a street artist best known for his haunting, stylised images of women’s faces, he understands better than most that beauty can be fleeting. Seeing his artworks gradually worn away by natural and human elements has taught him to appreciate the unexpected beauty of an image as it begins to blend back into its more prosaic surroundings.

Rone has gone from spearheading Melbourne’s fledgling street art movement in the early 2000s to being a celebrated fixture on the international street art scene. An inveterate traveller, his distinctive female muses have followed him around the world, and can be found – in various states of decay – peering out from beneath overpasses and emblazoned on walls everywhere from New York to New Zealand and many places in between.

Rone’s exhibit, Time, is quintessentially Melbourne, found in the Ballroom of Flinders Street Station. There’ll be 11 distinctly different rooms to explore across the 112-year-old site, each themed to evoke a specific part of the city’s history – paying particular attention to the working class. Think typing pools, machine rooms and public libraries.

Expect to find painstakingly preserved period pieces – including 14 matching vintage typewriters, antique medicine bottles and more – as well as clever recreations by Rone and his team of collaborators.

Join other Melbourne Forum members to explore this fascinating location and immerse yourself in Rone’s magic.