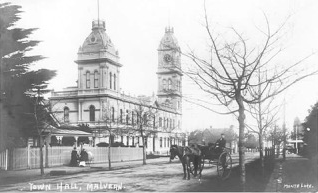 Come on a guided heritage walk of the Malvern Civic Precinct with the Mayor of Stonnington and PMI Vice President, Cr Steve Stefanopoulos.

The late 19th century saw substantial residential and commercial development such that by 1891 Prahran had a population of almost 40,000 and Malvern 11,000. Following the election of the Kennett government in the Spring of 1992, as part of a comprehensive reorganisation of local government in Victoria, the Cities of Malvern and Prahran were amalgamated to form the City of Stonnington. The Malvern Town Hall was renamed the Stonnington City Centre and it became the corporate headquarters of the new Stonnington City Council. In 2015, the new Stonnington City Centre, opposite at 311 Glenferrie Road, was opened and the Malvern Town Hall reverted to its original name.