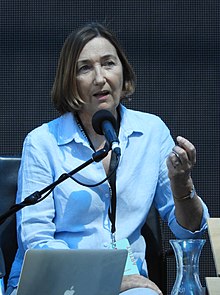 Marian Wilkinson is one of Australia’s best known journalists. At various times she has been Editor of 4 Corners, where she is presently Senior Reporter and has worked at all Australian major newspapers; she has worked for The Age and Sydney Morning Herald where she was Deputy Editor, the Australian, and the National Times. She served as Washington correspondent for the Fairfax stable. In her glittering career she has won two Walkley Awards.

Whilst much of her work has involved investigative journalism, perhaps due to her roots in Queensland where she grew up under the rule of Joe Bjelke Peterson, she has also written extensively on the environment. In 2009 she won the Eureka Award for The Tipping Point, a report on the melting of arctic sea ice.

She has recently published  “The Carbon Club” of which it is said “How a network of Influential climate  sceptics, politicians and business leaders fought to control Australia’s climate policy.”

The timing of Ms Wilkinson’s address could hardly be more appropriate bearing in mind the Glasgow Conference in November.