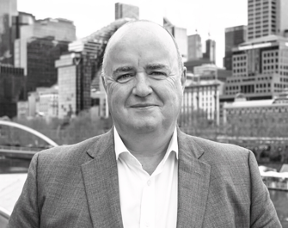 “While Melbourne is still very much in recovery mode, now is the time to double down on what makes our city thrive and that starts with greater collaboration, integration and investment from all levels of government to business and community leaders.”

The Committee’s first Benchmarking Melbourne Report measures Melbourne’s all-round performance against 20 peer cities. This independently produced report proves there is much for Melburnians to be proud of. It also highlights the need for greater collaboration between business, institutions, government, entrepreneurs and residents, to ensure a Greater Melbourne with a Greater Future.

With 30 years’ experience in executive roles across Australia and Europe, Mark Melvin has a background in retail banking, franchising, oil and gas, and retail across two continents. Since coming to Australia from his role overseeing franchising for Abbey National’s retail banking business, Mark has held senior distribution roles at ANZ, National Australia Bank and Westpac’s franchised mortgage network RAMS. In Mark’s previous role as Chief Executive, Bank of Melbourne and State General Manager Westpac Retail & Premium Victoria/Tasmania, he led a team of more than 2,000 passionate Victorians and Tasmanians who serve over 2 million customers through a network of more than 230 branches and business banking centres. Having made Melbourne his home in 2003, Mark is a proud Melburnian and enthusiastic Collingwood fan!

Join Mark as he shares his vision as the new CEO of Committee for Melbourne and insights from the Benchmarking Melbourne Report.