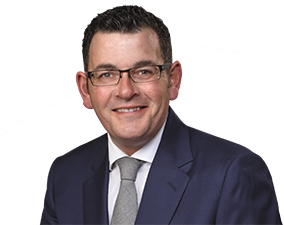 Venue to be confirmed closer to the date
Melbourne, Vic 3000 Australia

Signature Dinner with the Premier of Victoria, The Hon Daniel Andrews MP

We are delighted to invite you to join us for a Signature Dinner with the Premier of Victoria, the Hon Daniel Andrews MP on Tuesday 23rd July 2019.

Dan was appointed to the Cabinet in 2006, before becoming Minister for Health in 2007 and going on to devise the landmark Victorian Cancer Action Plan and the state’s first Comprehensive Cancer Centre.

In December 2010, Dan became Leader of the Opposition. In 2014, he was honoured to win the support of the Victorian people and was sworn in as our state’s 48th Premier.

In their first term of office, Dan and his team devoted every day to building the big road and rail projects our state needs, creating good stable jobs, making sure every child can reach their full potential and that our loved ones get the care they deserve.

In 2018, Dan was again given the great honour of being elected as Premier, leading a strong majority Labor Government that offers a positive plan for our state’s future.

This is an event that can not be repeated.