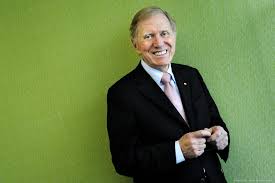 We are delighted to invite you to join us for a Signature Dinner with the Hon Michael Kirby AC CMG on Thursday 20th June 2019 as part of our 10th year anniversary program.

When Michael Kirby accepted John Ridley’s invitation to join us for lunch in November 2014, we found that our regular lunch format would not be suitable; our Signature series was born and remains a highlight in our calendar.

The Hon Michael Kirby is chair of the Human Rights Institute of the International Bar Association, the largest global organisation of lawyers.

This body has become concerned about the failure of the nine states, members of the United Nations, to comply with the direction of the International Court of Justice in its advisory opinion in 1996, that they were bound to engage in bona fides negotiations with a view to reduction of nuclear stockpiles and the destruction of nuclear-weapons. Despite this call by the International Commission of Jurists the nuclear weapon states have done precisely nothing. In response, a civil society organisation formed in Melbourne, ICAN (International Campaign against Nuclear Weapons) began a campaign to establish and international binding treaty of the United Nations declaring that the “use, threat of use and possession of nuclear-weapons is illegal in international law. The terms of such a treaty were agreed by the general assembly of the United Nations on 7 July 2017 by 121 member states with only one dissenting. The draft treaty has been signed and ratified by 24 countries. It will come into law when it is ratified by 50. The signatories already include Austria, the Irish Republic, South Africa, New Zealand, Thailand and many others. No nuclear-weapons state has ratified the treaty. The Australian Labor Party has adopted a principle that Australia should follow New Zealand and ratify.

Separately, on 5 April 2019 Human Rights Institute of the International Bar Association organised a private audience with Pope Francis at the Vatican in Rome, to seek to persuade him to support a clear statement that criminal laws against LGBTIQ people are not needed and are contrary to human dignity. In the event, Pope Francis withdrew only three days before the audience. However, he nominated his top official, the Cardinal Secretary of State to receive the IBA delegation. Michael Kirby addressed the Pope’s delegate and explained what it was like growing up in a country that had criminal laws targeting gay people. At the end of the session, the Cardinal said that there were many common grounds between the Holy See and the IBA on this issue. Discrimination and disrespect for human dignity was totally forbidden by Catholic doctrine.

This is one event that can not be repeated.