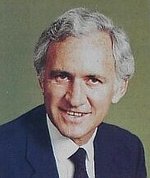 Political leadership today – what can we learn from Andrew Peacock AC?

POSTPONED due to COVID RESTRICTIONS

Members’ Lunch with the Hon Mark Birrell and John Ridley AM

With the passing of Andrew Peacock AC, Australian politics probably lost the last of the ‘small-l’ liberal leaders.  What lessons are there from him that could help shape today’s less than happy political environment?

Peacock was an Australian politician and diplomat. He was the member for Kooyong for 28 years. He served in the cabinets of three Liberal Prime Ministers and was a very successful Foreign Minister.

He served twice as leader of the Liberal Party, leading the party at the 1984 and 1990 elections. He very nearly defeated Bob Hawke in 1990.

He left parliament in 1994 and served as Ambassador to the USA from 1997-9 and will be remembered fondly by those members who were lucky enough to have joined him at a Signature Dinner in 2017 with us at the Park Hyatt.

The Hon Mark Birrell, former Minister in the Kennett Government, and John Ridley AM, former Peacock Chief of Staff and Liberal Party State Director, will dissect Peacock’s record and its relevance for today’s political paradigm.