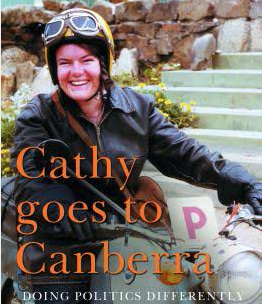 In 2013 Cathy McGowan became the first female independent to sit on the crossbench, where she would represent the Victorian rural electorate of Indi for six years. Winning the seat of Indi, after the Coalition had held the seat for 82 years, was a watershed moment. Indi became ‘Exhibit A’ for future political campaigns – from Kerryn Phelps as the Member for Wentworth to Zali Steggall in Warringah.

During her time as a politician Cathy actively worked in Parliament to develop policy around regional development, a national integrity commission, a code of conduct for politicians, as well as drought policy. In 2019 she was awarded The Accountability Round Table award for political integrity.

In the true sense of Doing Politics Differently, Cathy’s book tells both the story of the campaign to win Indi around the community’s kitchen tables and the subsequent realities of negotiating good policy with the major political parties.

The book is a handbook – a ‘how-to-be-elected’ and a ‘how-to-survive’ Canberra. It is a manifesto for an alternative community-based politics told through the prism of the story we know as ‘Cathy McGowan Goes to Canberra’.

Cathy is an Officer of the Order of Australia, a Churchill fellow and lives very happily on her farm in the Indigo Valley in northeastern Victoria.