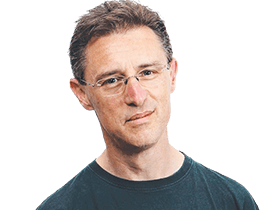 Gideon Haigh is known as perhaps Australia’s best cricket writer. He has a regular column in The Australian and often features as an erudite commentator on the ABC program, “Outsiders”. Many of his cricket books have won the highest awards for sporting journalism.

But his skills are by no means confined to cricket. In 2015 he wrote the much lauded “Certain Admissions – a Beach, a Body and a lifetime of Secrets” involving the trials and conviction of former Scotch College boy John Bryan Kerr for murder in 1952.

Several years ago he became involved in the teaching of plain English to judges and his attention was drawn to the tragic death, in 1938, of little Max Chester who drowned when he fell into an open ditch across a road in Hurstville.  The disaster lead to one of the most celebrated legal cases in Australia’s history in which the youngest ever appointee to the High Court of Australia, Herbert Vere Evatt, later known as Doc Evatt, delivered a remarkable dissent when the High Court refused Max’s mother’s claim for compensation.

Evatt was an extraordinary, gifted man who became the only Australian Secretary General of the United Nations General Assembly. He subsequently became leader of the ALP but lost 6 consecutive elections to the Liberals headed by Sir Robert Menzies.

In “This Beautiful Boy – Doc Evatt and the Great Australian Dissent”, Gideon Haigh has written a remarkable account of Evatt, his glittering legal career, and the consequences following his dissent in Mrs Chester’s case. The book is attracting remarkable reviews and our discussion with Gideon Haigh will be eagerly awaited.