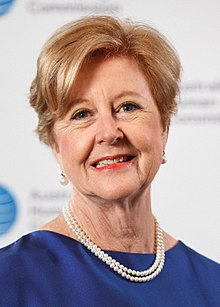 We are delighted to announce that Prof Gillian Triggs, UN Assistant Secretary-General and Assistant High Commissioner for Protection UNHCR will be joining us all the way from Geneva for a special MF Digital event.

Prof Triggs was one of our first Signature Event Conversation Leaders in 2015 at the Sofitel Melbourne on Collins. Gillian then became a member for a short time until she relocated to Sydney, and now, she is all the way in Geneva.

Gillian is well known as a public international lawyer who has held a number of appointments in service to human rights and the refugee cause, including as President of the Australian Human Rights Commission.

Gillian oversees UNHCR’s protection work in support of millions of refugees, asylum-seekers, those who have been forcibly displaced within their own country and stateless.

A dual national of Britain and Australia, Gillian has held a number of leadership roles, including as Director of the British Institute of International and Comparative Law in London, President of the Asian Development Bank Administrative Tribunal, Chair of the UN Independent Expert Panel of Inquiry into Abuse of Office and Harassment in UNAIDS, Dean of the Faculty of Law and Challis Professor (Emerita) of International Law at the University of Sydney, and Professorial Fellow of the University of Melbourne.

Gillian has supported many not-for-profit groups, including most recently as Chair of Justice Connect, that connects 10,000 lawyers to provide pro bono advice to asylum-seekers and others needing legal support. She is also the author of many books and papers on international law, including ‘International Law: Contemporary Principles and Practice, (2nd ed. 2011) and Speaking Up (2018).