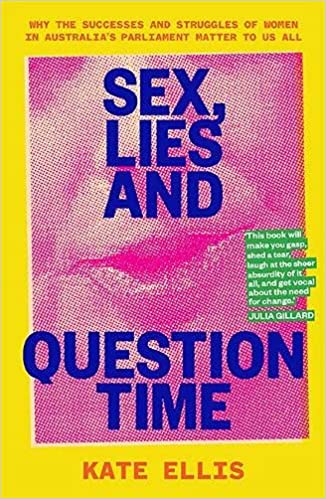 Why women in Australia’s parliament matter

Reading the book by former MP Kate Ellis will give you an idea of the good, the bad and the ugly of life as a woman in Australian politics.

Sex, Lies and Question Time: Why the successes and struggles of women in Australia’s parliament matter to us all (Hardie Grant Books, March 2021) surveys some familiar ground through the big picture gender inequality lens. Seventy-seven years after the first woman entered Australian parliament, female politicians are still the minority. They have to deal with scrutiny over their appearance, their sex lives, their parenting and their portfolios in a way few of their male colleagues do.

Alongside her own experiences from fifteen years in parliament, Kate Ellis reveals a frank and fascinating picture of women across Australian politics, including Julia Gillard, Julie Bishop, Linda Burney, Sussan Ley, Penny Wong, Sarah Hanson-Young and Pauline Hanson. Kate explores issues like sexism, motherhood, appearances, social media, the sisterhood and, of course, sex. But she also celebrates everything Australian female politicians have achieved.

Kate Ellis represented Adelaide in the Australian House of Representatives for Labor from 2004 until 2019. She served in multiple portfolios in the outer ministry of the 2007–13 federal Labor government and was in shadow Cabinet until she left parliament at the 2019 federal election.

Wry, candid and provocative, this book is a powerful call to demand more of our leaders and our institutions. It reminds us we need greater diversity to shape a fairer Australia, where ‘women’s issues’ are everyone’s issues. A better parliament means a better Australia. The stakes are high and the standards should be too.

“A fascinating insider’s account of how Australia’s Federal Parliament has fallen behind when it comes to the experiences of women in the workplace, and a compelling call for its modernisation. I urge anyone with an interest in Australian politics, gender equality, and the future of work to read it.” — Kate Jenkins, Sex Discrimination Commissioner.

This series explores contemporary themes through the non-fiction written word. After a year of stimulating discussions, this event yet again brings to the table another current and pressing issue.

Read the book, come with an open mind, hear differing perspectives and uncover what your fellow readers think.