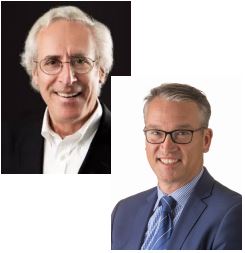 Take a break with Bruce Wolpe and Tom Switzer

When Bruce Wolpe and Tom Switzer join us on 17 November to discuss the outcome of the US election there is no doubt there will be a lot to review and analyse in what has been a tumultuous year in American politics.

Will incumbent Republican Donald Trump prevail on the 3 November election or will his Democratic rival, former vice-president Joe Biden, secure the keys to the White House?

Bruce Wolpe and Tom Switzer will bring great insight into the respective campaigns — what went right for the presidential candidates and what went wrong.

Bruce is a senior fellow at the University of Sydney’s United States Studies Centre — a research centre dedicated to the rigorous analysis of American foreign policy, economics, politics and culture.

A regular contributor on US politics across several Australian media outlets including The Sydney Morning Herald and Sky News, Bruce served on the Democratic staff in the US Congress during President Barack Obama’s first term. He was also chief of staff to former Prime Minister Julia Gillard.

Tom Switzer is a respected writer and commentator on international affairs and the executive director of the Centre for Independent Studies — a Sydney-based free-market think tank.

He is a former senior fellow at the United States Studies Centre (2009-17) and was editor of The Spectator Australia from 2009 to 2014. Tom has written for numerous publications including the Wall Street Journal, New York Times and Washington Post, is a columnist at The Sydney Morning Herald and Australian Financial Review and hosts Between the Lines on the ABC’s Radio National.

Join us for this special Melbourne Forum event where Bruce and Tom will review and analyse the respective presidential campaigns, the election result and the immediate aftermath.